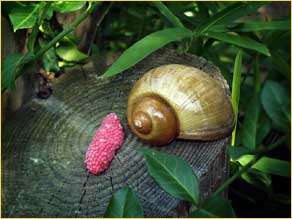 The Mississippi Department of Agriculture and Commerce – Bureau of Plant Industry adopted September 12, 2001 an Emergency Applesnail Regulation. The regulation was adopted In order to prevent the introduction and spread within the State of Mississippi the destructive plant eating Applesnails of the family Ampullariidae. Under the provision of Sections 69-24-7, 69-25-9,69-25-17, 69-25-19, 69-25-23, 69-25-25, and 69-25-35, Mississippi Code 1972, declares and gives public notice thereof that the movement of live forms of this pest into and within the State of Mississippi in any stage of development is hereby prohibited in order to eradicate the Applesnails were it to be introduced.

The Channeled Applesnails were introduced to Taiwan and the Philippines in the 1980’s to be cultured for human consumption. Some of the stocks either escaped or were released into the wild. The species spread rapidly and now reaches from Indonesia to southern China and Japan. They were introduced into Hawaii in 1989, both for human consumption and through pet-trade releases. Instead of becoming a useful food source they escaped to the rice fields, the snails became a serious pest, posing a real threat to the rice production and the environment in general. These applesnails have become a significant crop predator in Southeast Asia where it damages rice fields, and in Hawaii where it consumes rice and taro plants. It also can host rat lungworm (a parasite), which can infect humans. These Applesnails can seriously affect ornamental and various other types of nursery stock, as well as many other plants.

The recent spread of applesnails over the world and their ability to become a pest illustrates the dangers that come along with the introduction of non-native species. It should be clear that this is the main reason that the State of Mississippi has issued the regulation when it comes to the movement of these applesnails. We cannot state this enough: if anyone has these applesnails never release them into local ponds, lakes, streams, drainage structures, or rivers.