You are here: Home › Agency Info. › About Andy Gipson, Commissioner of Agriculture & Commerce 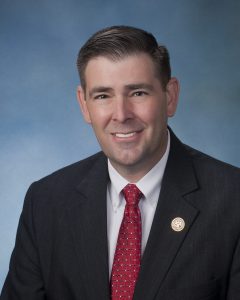 As a farmer, lawyer, minister and former State Representative, Gipson brings rural sensibilities together with state government experience to work with all Mississippians to promote, market and strengthen agriculture and commerce in the state.

“It is crucial we work together to plant and tend the seeds of opportunity for agriculture,” Gipson says. “I invite all Mississippians of every background to work in unity to strengthen and grow agriculture, the state’s largest economic sector. Let’s keep on working together and pulling the same direction.”

Since taking office on April 2, 2018, Gipson has visited each of the state’s 82 counties on a Mississippi Farm Tour to listen to the issues, challenges and opportunities facing Mississippi farmers. He launched the Genuine MS® branding initiative to increase public awareness of Mississippi’s farm, food, crafted and fabricated products to increase sales and market opportunity for Mississippi producers. Gipson established a “County Correspondents” program in every county to provide local farmers with information from MDAC and to hear directly from them on local issues. He launched the Agricultural Workforce Development initiative, which includes internships through the department, to connect future leaders to careers in agriculture.

Gipson is leading the way on truth in labeling laws for meat products to prevent consumer confusion from the entry of plant-based and cell-cultured foods. He has introduced regulatory reforms to increase opportunities for small farmers, mobile vendors and roadside produce stands. And, Gipson created an office within MDAC to promote forestry and timber and to expand those markets domestically and internationally.

Prior to his service as Commissioner, Gipson served in the Mississippi House of Representative for ten years (District 77: Simpson and Rankin counties), first elected to public service in 2007. Gipson chaired the House Judiciary B Committee from 2012-2018 and the Ethics Committee from 2016-2018. He also served as a member on the House Agriculture, Appropriations, Ways and Means, County Affairs, Insurance, Municipalities, and Transportation committees. Gipson was Treasurer for the Mississippi Legislative Conservation Coalition from 2010-2017 and Treasurer for the Mississippi House Republican Conference from 2012-2016.

Gipson and his family are engaged in reopening the Hilltop Memorial Children’s Ranch, a faith-based outreach for children built by his late father on the family farm. Gipson also serves as an advocate for Mississippians suffering from traumatic brain injury, depression and mental illness, and their families.

Gipson is an ordained Baptist minister, having served as a pastor and evangelist. He and his wife, Leslie, have been married since 2001. They have four children — Joseph, Benjamin, Abigail and Sarah. They reside on their small working farm in Simpson County.

» Mississippi Board of Animal Health